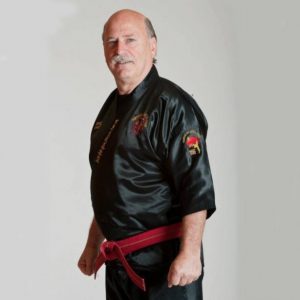 Hanshi John Therien is in great demand around the world for teaching seminars, speaking and promoting/organizing martial arts conferences.

He’s the founder of Therien Jiu-Jitsu & Kickboxing Dojo, established 1968, one of Canada’s largest and most successful Martial Arts school. His school is celebrating 50 years of excellence this year (2018), which is a milestone unheard of in this era and industry.

He has certified and graduated over a thousand Black Belts. Head instructor for more than 3000 active students in the Can-Ryu system.

Co-founder of World Kobudo Federation (WKF). A non-political martial arts organization with affiliates in 32 countries and thousands of members.

Approximately 200 schools, in Canada and around the world are link either directly to him or to his lineage of his black belts.
Executive Director for the Canadian Black Belt Hall of Fame.
Founder (1991) Promoter of Capital Conquest, one of the largest & most successful martial arts training camp in the world.

Some of Hanshi John Therien’s martial arts achievements include:

With no sign of slowing down, Hanshi John Therien is a hard man to keep up with, with the same great energy, enthusiasm and ideas that he kicked off his career with. There’s no sign of this man backing away. Martial Arts truly feeds the blood in his veins. 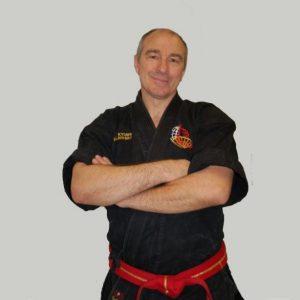 Alain Sailly was born in 1958, and started Judo with his father at the age of 5.

In his childhood, he trained with the adults, so it was very demanding. In his teens and early twenties he competed at an international level in judo, free style and greco roman wrestling, sambo and full-contact jitsu.

A World Class Martial Artist with movement like no other! Even those with years of martial arts training can not show such a blend of skills at as high a level as Alain Sailly, Master of Goshindo, the Way of Protecting Oneself. The best of Aikido, karate, judo, grappling, and jiujitsu combine in unique combinations that will improve flow, coordination, strength, flexibility, and mental calm.

He has a physical education degree from Sport University Vichy.

Currently, Monsieur Alain Sailly lives in the north of France on the Belgium Border, in Carignan. Moving back to that area recently, He has a new dojo that is now the international headquarters for Goshindo.

The Way of Self-Defense

Through expert instruction, guided practice, and an insightful ideas into training, this website, and the materials it offers shows how!
The Website includes:

• Kyoshi Sailly’s unique series of defenses: defenses from a choke, wrist grabs, knife hand strikes and hook punches. The defenses are crammed with strikes and joint-locks, throws, and pins in dizzying combination!
• Basic instruction in key elements of Martial Arts practice. How to improve your kicking, punching, grappling, falling, throwing.
• angles, slo-motions, closeups and stills of all techniques.
• Complete explanations from Kyoshi Sailly himself!.
• Creative drills for instructors to teach skill sets.

About Sailly & His Art

Goshindo is a Japanese term which could be translated as “The Way of Self-defense”.
Some have likened, defined, Goshindo as an volatile, explosive cocktail of self-defense techniques.

It is a martial art in constant evolution, the work of Alain Sailly, 7th Dan, of France. He based this on the lessons of several traditional schools such as Hakko Ryu Ju Jitsu and Daito Ryu aikijujutsu. These schools are the origins for the modern forms of Judo, Ju-Jitsu, or of Aikido.

Until 1978, Alain Sailly mainly studied these traditional martial arts of Japanese origin. He noticed that body mechanics in these combat arts were not always optimal, not always practical. He also noticed that the forms of throws and projections as they were practiced in Judo, Sambo,Wrestling or in other forms of Ju-Jitsu were often similar and complementary.

Similarly he noticed was the same one as for the striking and kicking forms, the joint-locks, controls, and strangle.

He then undertook to seek other forms of techniques, other approaches to self-defence. During 10 years of research, Alain Sailly learned from his meetings with various professors of several styles. Prof. Roland Maroteaux (hakko ryu) (aikido), Gozo Shioda, Prof. Morris (modern jujitsu), John Therien (jujitsu & pressure points), Lucien Manicacci (wrestling & sambo) the founder of Goshindo started to build a program of techniques to increase martial effectiveness, contribute to the development of the body and spirit. He selected a large range of techniques and did a work of synthesis around these elements, while refusing to let itself lock up in a particular style or mode.

This set of diverse origins makes Goshindo a martial art in constant evolution and which reflects, the universalization of martial arts.

Hanshi Sailly is the International Ambassador of the WKF travelling to over 30 countries every year, spreading the skills and values of the martial arts and the mission of the World Kobudo Federation