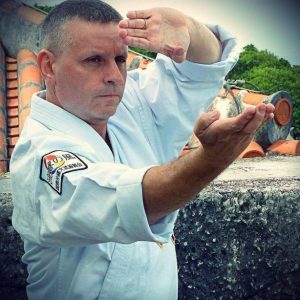 Always an the quest of improvement, he has visited Asia over 40 times in order to gain first hand knowledge. In 1972, he established Northern Karate – one of the most successful, well-respected martial arts and personal development organizations in the world, with more then 9000 active and very loyal students. A former internationally-ranked competitor, Cezar was six-time Canadian Champion.

He was rated #1 by the North American Sport Karate Association (NASKA), the PKL, Karate Illustrated magazine and he has received hundreds of awards, trophies and medals. He holds very senior grades in Karate – Chito-ryu, Shorin-ryu, Goju-ryu. In Kobudo he is likely the only person in the world to hold rank and teaching licences in Ryukyu, Matayoshi and Yamane systems (all received in Okinawa). He is also ranked in Jujutsu and Silat.

In addition to several dozens of articles for a variety of martial arts publications, Borkowski authored Modern Shotokan Karate and co-authored best-selling The Complete Idiot’s Guide to Martial Arts. He also researched and edited The History and Traditions of Okinawan Martial Arts and is currently working on translating and editing Mysteries of the Ryukyu Hand, as well comprehensive take on state of Okinawa Karate, Last of the true believers. Cezar’s videotape credits include Kobudo Weapons, Winning Point, Essential Okinawan Kobudo, The Master Class, and the Northern Karate System a 15 DVDs Series.

Cezar has been featured in international magazines (Japan, England, Germany, Sweden, India and France), newspapers, and on radio and television. He lectures on a wide range of martial arts and related topics at events around the world.His greatest influences over the years have been Masami Tsuroka and Robert Dalgleish.

He is also the Chairman of the technical committee of the Canadian Black Belt Hall of fame. Plus and most importantly he is one of the nicest guys ever in the martial arts.

But perhaps his greatest accomplishment is the attainment of Judan or 10th dan in 2012 from Tetsuhiro Hokama and the International Karate-do Organization. He is one of the few if not the only Caucasian to attain such distinction. Little alone the only Canadian for sure. 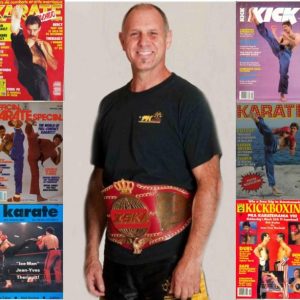 Jean-Yves Thériault was born on January 15, 1955 in Paquetville, New Brunswick, Canada. He was the fifth of six sons.

Thériault began his martial arts training in 1972 at age 17, achieving blue belt status in Jujutsu before becoming interested in Muay Thai and Kickboxing few years later. He won his first kickboxing competition in 1976 after only six months of training under the direction of John Therien (who now holds Hanshi degree in Ju-Jitsu), and subsequently became Canadian middleweight kickboxing champion two and a half years later.

In 1980 he won the PKA Middleweight World title (Full-contact karate), and held the championship for a record of 15 years.
He has also won world titles in both the ISKA and PKC associations.

He was referred to as “The Iceman,” a nickname given to him by Rodney Batiste during his first title defence, due to his intimidating icy stare and cool demeanour in the ring.

Thériault has a number of high-profile victories, including two wins against future four-time K-1 champion Ernesto Hoost and a draw against the legendary Don “The Dragon” Wilson. He has also fought world champions such as Rob Kaman, Tosca Petridis and Rick Roufus.

Thériault has worked with many groups and charities, such as the Big Brothers, Children’s Wish Foundation, Laucan. He is author of a book on kickboxing techniques and has a series of videos on the science of combat sports. He is the subject of an hour and a half film produced by the National Film Board. He was voted Athlete of the Decade by the Sports Writers Association of New Brunswick. However, the New Brunswick Sports Hall of Fame still will not induct him into their ranks after several attempts by fans and friends.

Thériault has also become a world-class promoter for the sport of kickboxing.
With the aid of his friend Hanshi John Therien, he is giving new, young fighters the opportunity to realize their dreams in the “Iceman Amateur Kickboxing Circuit”.

Since his retirement on December 1, 1995, (a third-round knockout of Marcus Reid) Thériault still trains five days a week and teaches classes at Therien Ju-Jitsu & Kickboxing Schools.

Thériault obtained his Black Belt in Ju-Jitsu in early 2008. 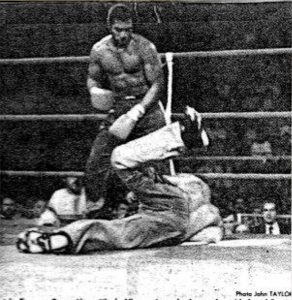 In His Own Words

This is the total account of Master Darrell Henegan’s career spanning over almost 44 years, the unwavering desire for perfection, the people who influenced, molded and inspired him. The people who showed him the way, and the way he chose to accomplish his dreams and aspirations. All of this while still maintaining DIGNITY, respect and honor, this is the true meaning of a champion.

Darrell Henegan started Taekwondo when he was 12 years old, a year after he had moved to Canada from Queens New York. One day when Darrell was waiting for his friend to finish his TKD class his instructor called him aside to talk. This chat would change Darrell’s life. The man convinced Darrell that he could accomplish anything he set his mind to.

Darrell passed his black belt in 1978. Inspired by his confidence and motivation Darrell won the Canadian Championship the next year, an amazing 11 more would follow.

In 1981 Darrell’s greatest accomplishment in Tae Kwon Do, at Santa Clara California he became the first African North American in Tae Kwon Do history to defeat Korea in a Gold Medal match to win The World Games One World Championship. 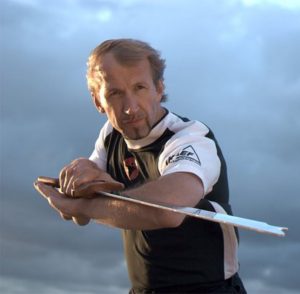 Punong Guro Johan Skålberg started with Martial Arts 1973 and a journey of research, experiences and learning has become a passion and a lifestyle.

As an early FMA pioneer he introduced Kombatan, Inayan Eskrima and Kali Sikaran to Sweden and has promoted his knowledge within these arts all over the world. Today he mainly promotes his interpretation of these arts within Kali Sikaran International (KSI).

From 1995 until September 2000, Punong Guro Johan Skålberg served as the Scandinavian Technical Director for the ISE (Inayan System of Eskrima), under the Late Mangisurosuro Mike Inay to promote and diffuse the ISE through Europe.

In May 1997, Johan Skålberg of Sweden was elected president of the EKAEF (European Kali Arnis Eskrima Federation) and selected Göteborg, Sweden as headquarters.

In 1998, for the purpose of realism and to preservation the Art in Competition, Punong Guro Johan Skålberg developed a competition system of stick fighting; Suntukan Stick Fighting. Today, Suntukan stands alone as both a competitive system and training method for stick fighting in the IKAEF and KSI (Kali Sikaran International).

In November 2000, the EKAEF headquarters changed its official title EKAEF to IKAEF (International Kali Arnis Eskrima Federation) to recognize its extension through the Martial World. The organization become the biggest FMA organization in the world with more than 20 affiliate countries and many different masters and styles in cooperation. ln January 2009 he choose to step of the IKAEF organisation and focus only on KALI SIKARAN INTERNATIONAL.

Sensei Matt Dorsey has over 40 years of martial arts experience, including 8th dan in Isshin ryu karate and 2nd dan in Muso Shinden ryu iaido (samurai sword).  Sensei Dorsey first became aware of the WKF in 1992 when he arranged seminars in the USA for Hanshi Alain Sailly and has been coordinating his seminars there ever since.

He officially became involved with the World Kobudo Federation in 2012 after attending the Capitol Conquest in Ottawa, Canada where he met Hanshi Therien.  In 2014 Hanshi Therien and Hanshi Sailly asked Sensei Dorsey to help run the 2016 World Convention in Rochester, NY.  The convention brought in over 700 participants from over 20 countries and included seminars, tournaments, dinners and social events.

Sensei Dorsey has been a full-time martial arts instructor since 1980 and currently runs 3 dojos in Rochester, New Y,ork USA overseeing over 500 students.

He is also a co-director of the International Isshin Ryu Karate Federation (IIKF).

Michael Kossyvakis was born in Athens on January 27, 1965. At the early age of six, he started playing basketball and, until 1980, participated in many official matches. Michael entered the world of martial arts in March of 1974 starting with the American martial art Kajukenbo, and since then he has actively, faithfully and tirelessly been devoted to them.

In 1979, Michael Kossivakis was a pioneer of Full-Contact kick Boxing in Greece and, simultaneously, he began his apprenticeship in Jiu-Jitsu. In 1980, he also started Boxing.

Michael has been a professional instructor since September 1985, honouring the teaching of martial arts as his exclusive and sole occupation, in his own martial arts schools. He served his military service as a Special Forces Operator (Green Beret) and Paratroopers Instructor.

During his 44 years of experience in the field of martial arts, 33 years of Michael’s professional career have been spent in his own schools, investing over 70,000 hours to teaching. Over this period, he attained the following qualifications:

Michael began specializing in the combat usage and application of the stick in 1991 in Ireland, and in the usage and application of the combat knife in the U.S. in 1993. Since then, he has remained dedicated to the expansion of his own knowledge, participating in over 200 specialized martial arts seminars in Greece, England, France, Germany, Belgium, Holland, Switzerland, Italy, Hungary and the U.S.

Currently, Michael is responsible for the overall operation of the FMA programme in 11 martial arts schools and 11 training centres in Greece, while the FMA POLAND (Filipino Arnis De Mano Poland) and one school in WALES have incorporated his knife training program (FCS International Blade Programme) since 2010.